Today Jack got to sample some peaches and really seemed to like them. As you can see by the big smile on his face. If you look at the close up, you can see his top left tooth peeking out at you.

Also, we think he said his first word. "Dada". He had said "Hey dada" once but we thought it might be a fluke. But when I got home from work the other day, he was gabbing away until he saw me. He stopped and said "dada" in this sort of matter-of-fact way. As if to announce who I was. Both of our jaws dropped. And then someone (I think Heather) said, "Holy crap." Now, when he said "dada", I thought he was talking about me but it turns out he was talking about the the European movement of art and literature from the early 20th century. Oh well, close enough. 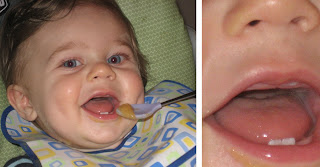 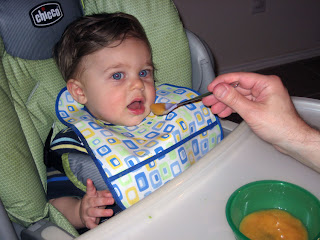 Yay for peaches! Quinn just ate her first peaches too. I'm patting myself on the back for pureeing them myself. I'm so cool :) haha